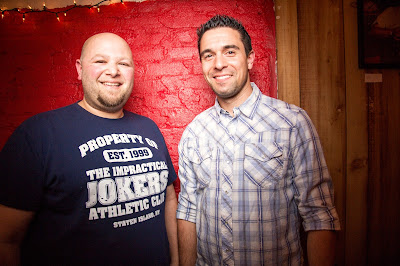 About the Podcast:
The idea for the Where's Larry Podcast started with Danny browsing through the iTunes TV & Film category in search of an interesting podcast to listen to. He discovered that the majority of the podcasts featured in the rankings were companion podcasts to popular tv shows, such as The Walking Dead, Game of Thrones, etc... At that point, a light bulb went off in his head! He had the thought, "Why don't I do a podcast about my favorite show, Impractical Jokers!"

Now the ideas were flowing and he was super excited to share them so he reached out to one of his best friends and fellow Jokers fan, Chris! When he shared the idea, right away Chris loved it and offered to partner up with Danny and start the podcast! The Where's Larry Podcast was born!


About the Hosts:
Just like the guys who inspired this podcast, The Tenderloins, Danny and Chris became friends in High School. They both grew up and still reside in Long Island New York. They are both avid TV watchers and their favorite show is obviously, Impractical Jokers. Danny has some previous podcasting experience as the Co-Host and Producer of The Ocho Podcast, a weekly pop culture podcast, which is a still up and running today! Chris has been a guest on The Ocho (see episode titled Football Movies) and after getting his feat wet was very eager for the opportunity to take on a hosting role! They are both very proud and excited to bring you this podcast each week!